We were watching the latest episode of How to cook like Heston on Channel 4 and he was demonstrating his method of making a cheese sauce and then using that to make a macaroni cheese. I was in the middle of cooking a chicken, sweet potato and butternut squash curry but I thought "I'd rather be eating that instead".


One problem with my new office is that you aren't allowed to eat or drink at the desks. Another problem is the nearby communal seating area and kitchen are being refurbished so there's quite a long walk to the next nearest place where I can sit and drink.

I found an interesting tea related chart on the Tea Appreciation Society website which lists a number of interesting tea related facts. Among them are the ideal temperatures for different styles. I already knew that green and white teas should be brewed at below boiling, but I didn't realise they only had to be at 65-70°C and 65-70°C respectively.

At the moment I have the following teas in the house:

Most of the time I drink tea without milk, which is handy in work since at the moment there isn't anywhere to keep any. I first started drinking it milkless when I was at university in Aberystwyth. Milk would go off before I had chance to use it so I just stopped bothering buying any. Now, when I have milk in tea, I prefer it to be semi-skimmed. For some reason, skimmed milk seems to make the tea taste worse, and full milk is a bit too creamy for tea.


The Charterhouse Fields lie just off London Road, to the south of Coventry city centre. For many years the fields have been accessible to the public but one of the local schools is attempting to annex a large portion of the site for their own private use. The Save the Charterhouse Fields Campaign is battling the school and council to prevent the loss of public access.

It would be a shame if the site was closed because I have walked through there a few times, taking photos or picking blackberries. 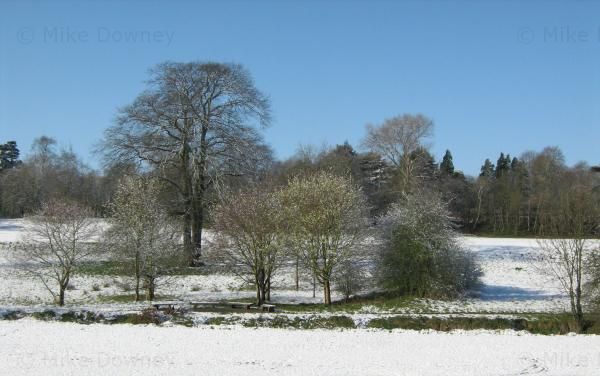 The above photo was taken in 2008 shortly after snowfall. I have more photos of the fields which were taken with my pinhole camera.

More information about the campaign is available from their website.


Since Amy Winehouse died and joined the infamous '27 Club', I was wondering if there was any significance in the number of whether it was simply a statistical fluke. I found this website which plots the age at death of hundreds of celebrities who died of drug or alcohol related causes. The site finds that the median age is 38. When narrowed down to musicians, the most likely age to die is actually 27.

After discussing the phenomenon with colleagues I decided to run an analysis myself to see what kind of distribution you obtain by plotting the ages of celebrities from obituaries taken from the last 10 years. This doesn't favour any type of celebrity or any type of death and I expected a 'young' peak for reckless 'fast-living' celebs and an 'old' peak for people who died of more natural causes. Nigel, who I share an office with, said he expected a peak in the 60s, followed by a small dip, then another peak in the 80s. This was based on reading obituaries in the newspaper. 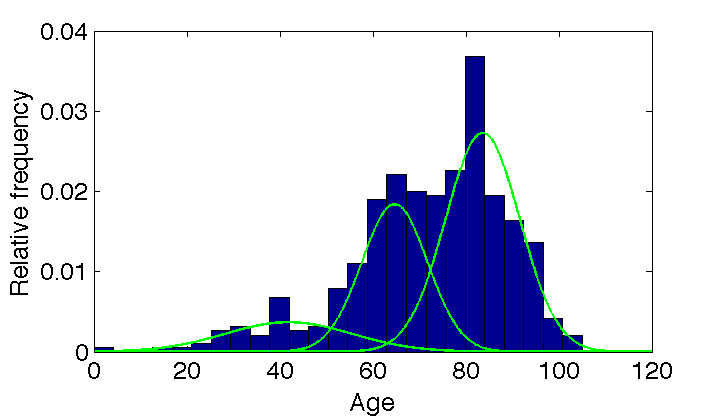 The histogram appeared to have 3 groups: young, middle and old, so I attempted to fit 3 'normal distributions'. When I did this I found the peak ages were: 42, 65 and 84.


If you're watching a film right now, there is a very good chance that one of these actors (link) is in it. The page is dedicated to all those actors who's faces are so familiar from other films but their names remain obscure.

Some of the actors are bordering on recognisable - Michael Ironside is one of those mentioned on the page. Personally I would also add Fred Ward (the star of Tremors who wasn't Kevin Bacon) and Matt Frewer (anyone who grew up in the 80s should immediately recognise him as Max Headroom).


Emma has created a new website: The Pizza Blog. We started by documenting tonight's pizzas: Tuna and wasabi, and Chicken and Chilli pizza.

We will be using the site to record the various pizzas we have made or bought.


I recently received an email from somebody called Ben, telling me about his new website about Coventry. It's called It's All About Coventry and aims to be an honest, realistic and useful guide to the city.

There are "What's On" listings as well as reviews of shops, bars and restaurants. You can also add comments to any of the articles and reviews. It looks like it is going to be a useful site for both visitors and residents.


A few weeks ago I discovered the Walkscore website. You give it an address and it uses Google Maps to plot nearby facilities and calculates a walkability value for the area.

We live near Coventry city centre and putting in our address gives a walkability of 53/100, or 'Somewhat Walkable'. There are some shops nearby which aren't on the map so I might add them and see what difference it makes.

Update: 01/01/09
I've re-run the score for our home address and it's gone up to 71/100 which is still 'Somewhat Walkable'. It looks like some of the local shops and take-aways have been added to the database.


I thought I'd collect together any useful pet related web sites, mainly ones to do with pets we own (at the moment: hamsters, degus and quail). I'll add more sites to the list as and when when I find any.


According to NewsBiscuit, Tony Blair decided that Parliament should move to Aberystwyth.

Tony Blair's final act as Prime Minister was billed as a huge boost for the regions today, when he announced that the government of the United Kingdom, would henceforth be re-located in the Welsh coastal town of Aberystwyth.


I spent a few minutes at lunchtime trying to fool the Oracle of Bacon - an on-line version of the famous game where actors are linked to Kevin Bacon in as few moves as possible.

I was trying to find names with a large 'Bacon number' by choosing people such as obscure Russian actors from the 1920s but the highest I managed was 5 links.


To commemmorate Anzac Day, one of our Australian colleagues in work always brings in a tub of home made Anzac Biscuits.

The biscuits are based on the long-lasting ones sent to the soldiers in the First World War.


My eyes have been feeling quite tired recently so I was thinking about getting some caffeinated eye drops to wake them up.


A photographer has followed the course of the River Sherbourne through the culvert under the city. A description of the journey and photographs are on his website.