I actually made these a few weeks ago but didn't get around to writing it up at the time. The flatbreads are like a cross between a crumpet and a galette style pancake.

Traditionally they are made using Teff Flour which appears to be naturally gluten free. There are several versions of the recipe which use a mixture of plain flour with some gluten free flours so I decided to try my own version. Originally I used a cup of plain flour with 2 tablespoons each of the other flours but the mixture came out a bit stretchy after fermenting so the version below has the amounts adjusted to reduce the amount of wheat flour to make the mixture less stretchy. 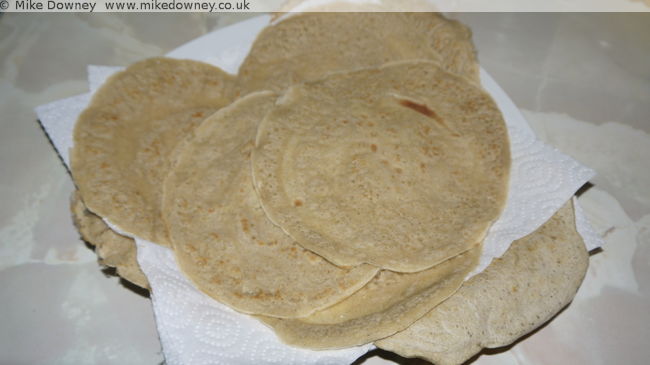 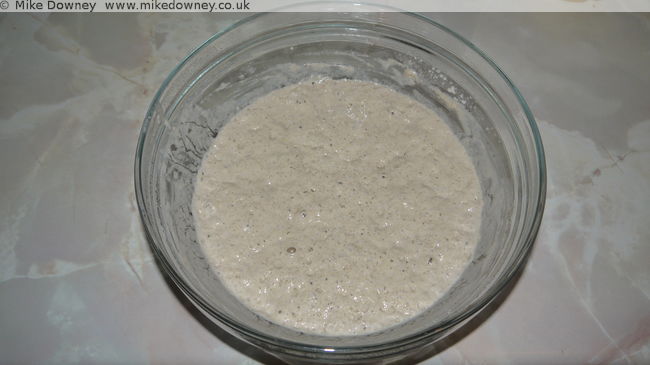 Whisk everything together, cover with clingfilm and leave in the fridge overnight. In the morning, take the batter out of the fridge and allow to reach room temperature.

Heat up any lightly oil a frying pan. Spoon in some of the mixture and spread to form a thin pancake. 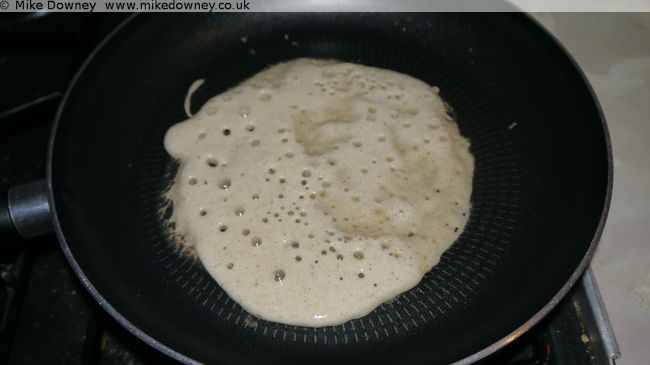 When it has cooked on one side, flip it over to cook the other side. Continue until all the batter has been used. To serve, return one of the pancakes to the pan, add the filling, roll up and reheat. 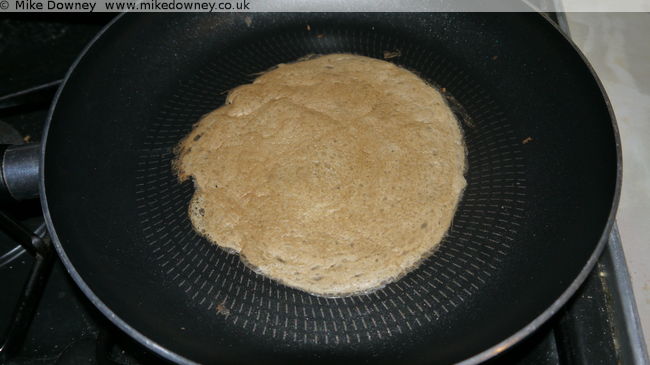 When we were on holiday in France this summer, we ate a lot of the buckwheat pancakes, both in restaurants and from the supermarket. We brought a couple of bags of buckwheat flour home with us and I meant to have a go at making when we got back. 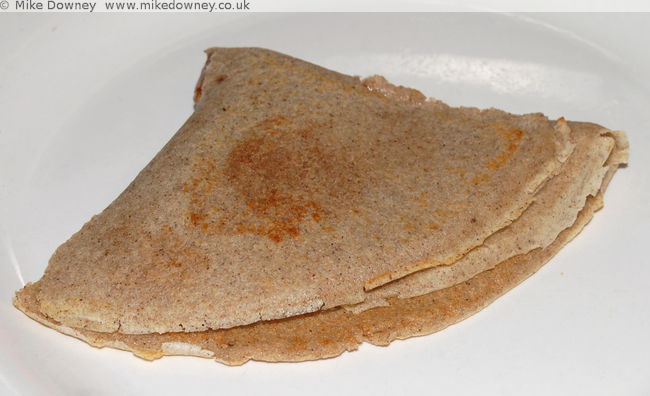 I made a thin batter from

I'm not sure exactly how much liquid I added - I kept adding it until the mixture looked right and gave a decent thickness of pancake.

My pancakes weren't quite as flexible as the ones we had on holiday - it was hard to get them as thin and not break them while getting them out of the pan, so I made them a bit thicker. They tasted similar enough to the genuine french ones.


We have been making a lot of pancakes recently, mostly variations on the extra-fluffy pancake recipe I discovered a few weeks ago. I went back to the original recipe, which used plain flour instead of self-raising:

The egg whites are whisked first until they become white and fluffy but I realised that it's possible to over-whisk them. If they become too firm and almost meringue-like, they won't mix into the rest of the batter properly.

The rest of the ingredients are mixed together then the egg whites are folded in. I find it easier to cook the pancakes using two frying pans: start them off in a small pan then lift them onto a plastic turner and flip them over into the larger pan to cook the other side. 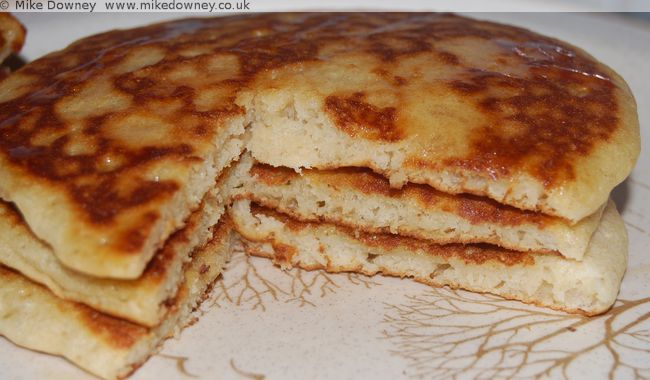 My most recent pancake experiment was to make crepes. The recipe was based on one by Nigel Slater:

Melt the butter then leave it to cool slightly. Sift the flour and salt into a bowl, add the eggs then gradually whisk in the milk. Finally mix in the melted butter.

It took a couple of goes to get the technique right. For the first pancake I tried to turn it over in the same pan but it tore and folded over. Eventually I managed to find a way which worked for me, which uses two pans a bit like above.

Put half a ladle of batter into a small 7-8 inch pan, give the pan a gentle swirl so the batter covers the pan. After a minute or so, when the batter has started to set, loosen the edges of the pancake so it moves freely. Hold the second pan over the top then turn the pans over so the crepe falls into the second pan, uncooked side down. 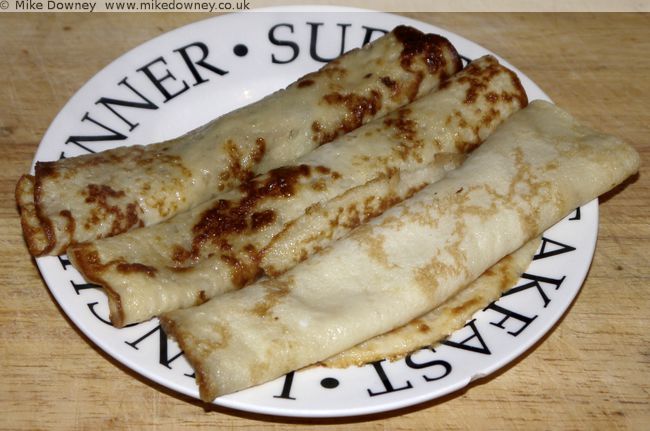 For a first attempt, we were very happy with the results. We had them as sweet pancakes but next time we might do some with a savoury filling, possibly covered with sauce or melted cheese and baked for a few minutes in the oven.


I occasionally have a go at making fluffy american-style pancakes and while they are usually good, they never come out as thick and fluffy as shop bought ones. I decided to look into how to make them softer and thicker and the secret seems to be egg white.

The recipe starts off similar to our old pancake recipe:

Mix everything together then take the egg whites and whisk them until they increase in volume and start to become meringue-like. Gently fold the egg white into the batter mix. 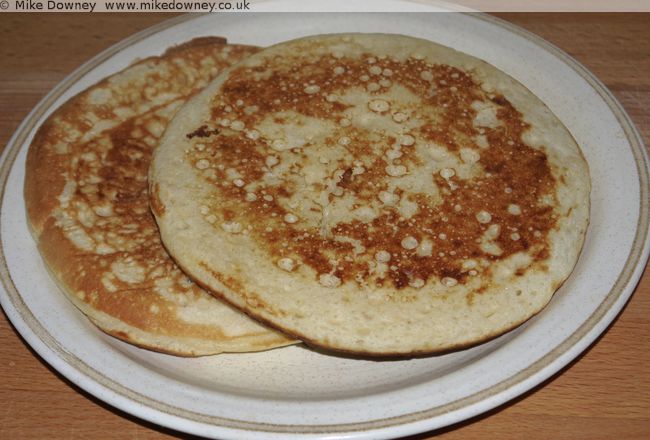 The mix made quite a lot of batter so I had enough to try different ways of cooking the pancakes. First I poured some into yorkshire pudding tins and cooked them in the oven at gas mark 4. The pancakes came out a very soft, very fluffy but a bit pale. My next attempt was also in the oven but at a higher temperature. The pancakes had a better colour but they also had a slightly hard crust. Next I tried cooking them in the traditional way, in a frying pan. These came out looking much better, but was slower since I could only cook one at a time.

The next step is to probably try some flavoured pancakes. Chocolate or fruit will probably work well.


Today is Pancake Day (or to be more traditional, Shrove Tuesday). Our pancake tea consists of Curried Chicken pancakes for main course followed by a couple of dessert pancakes which vary depending on what we have in the house but nearly always includes a traditional lemon juice and sugar pancake. This has been our tradition for at least the last 6 or 7 years.

The pancake recipe has varied but the one we usually do now came from Delia Smith's website (original link has gone off-line, this is similar) and is fairly reliable.

In the past we have often used a tin of chicken in white sauce and added some curry powder but this year I cooked it from scratch by finely chopping 2 chicken breasts and frying them in a little oil. I made a thick roux and added curry powder, cayenne pepper and a little turmeric before stirring in the cooked chicken. The pancakes were filled with a couple of tablespoons of the chicken curry mixture then sprinkled with grated cheese before being rolled up and rapidly eaten.

We shared three dessert pancakes this year. They were filled with chocolate coated raisins, traditional lemon juice and sugar, and golden syrup.


We bought some gram flour with the intention of trying some onion bhajis. We actually made gram flour pancakes first, basing it on a normal pancake batter recipe. We made a chicken korma filling by finely dicing and frying some vegetables then adding a packet of ready made curry (I know that's cheating but we usually buy that sort of thing if we see it cheap in the supermarket. They're handy to have in when you need to make something in a hurry).

We made the Onion Bhajis tonight. The batter was made using 2oz of gram flour, 2fl oz of water, a pinch of salt, a pinch of crushed chillies, a pinch of ground ginger, 2 crushed cloves of garlic, and a heaped teaspoon of curry powder. I chopped 2 small-ish onions, mixed them in the batter and shallow fried them, turning them over when they started to look cooked on one side. 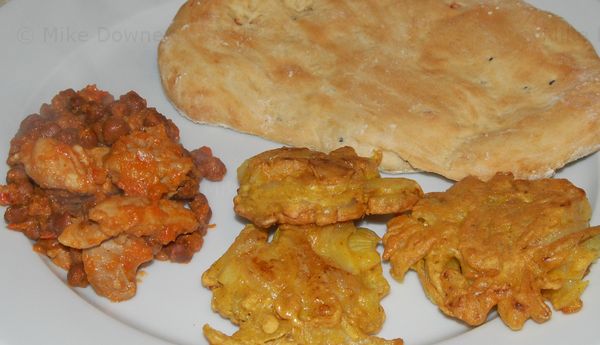 The bhajis were served with a chicken and chick pea curry (based on this recipe but using tomatoes, red peppers and onions as the sauce base) , and home-made naan breads.