This year at the German Market, I decided to try a few new things, so instead of just choosing at random, I picked something new or different. 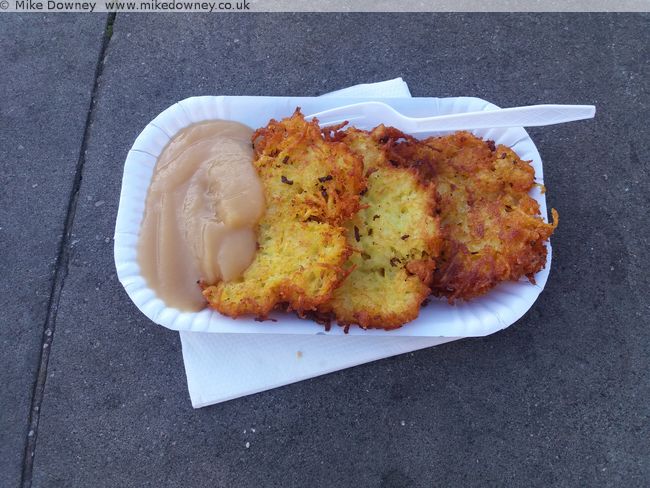 There were a couple of places selling potato pancakes. The first one I went to was serving 'plain' pancakes with either icing sugar or apple sauce. 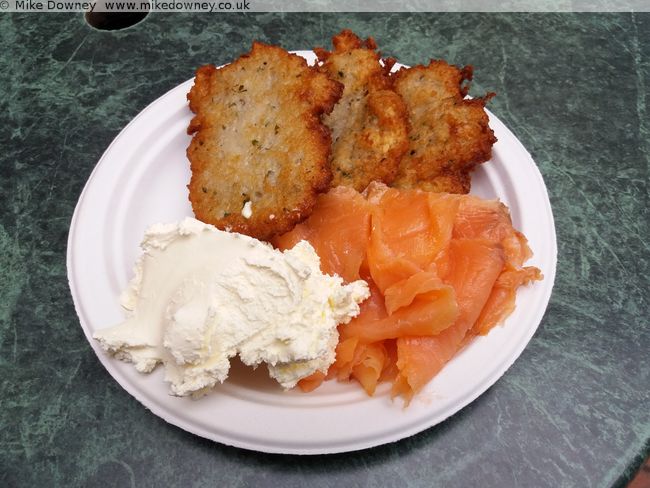 A few days later I went to a different stall and had savoury potato pancakes with smoked salmon and creme fraiche. 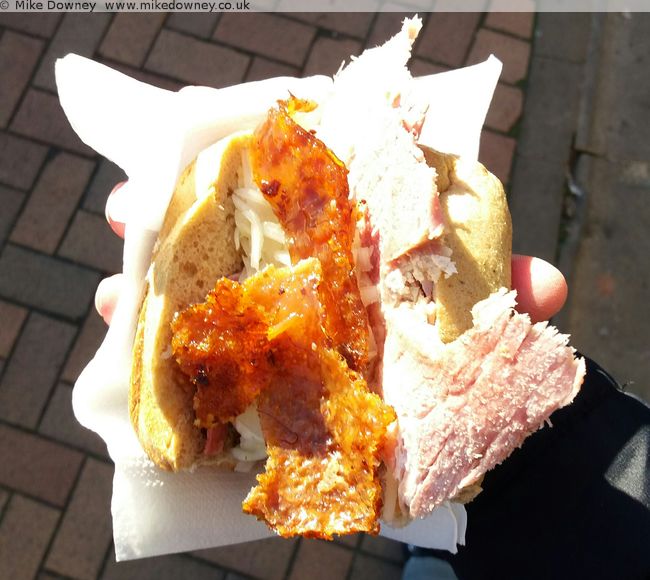 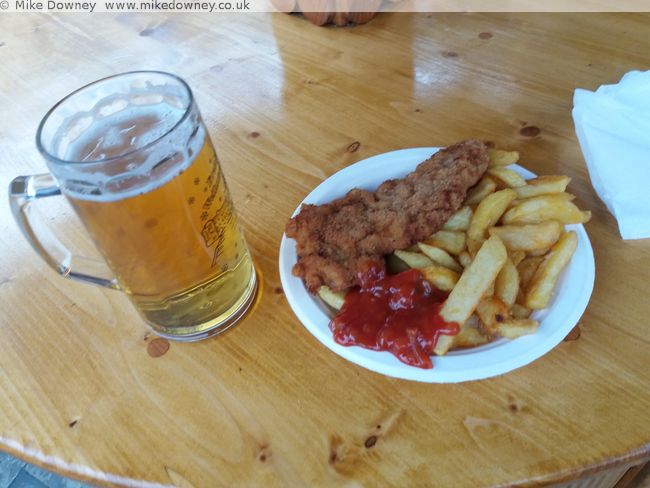 
The food market was back in Victoria Square so I went again to see what was available. There was a new Turkish Food stall which I hadn't seen before so I decided to get my food from there and used the random number app to choose off their menu. I had a spicy chicken wrap which was well filled and tasty. 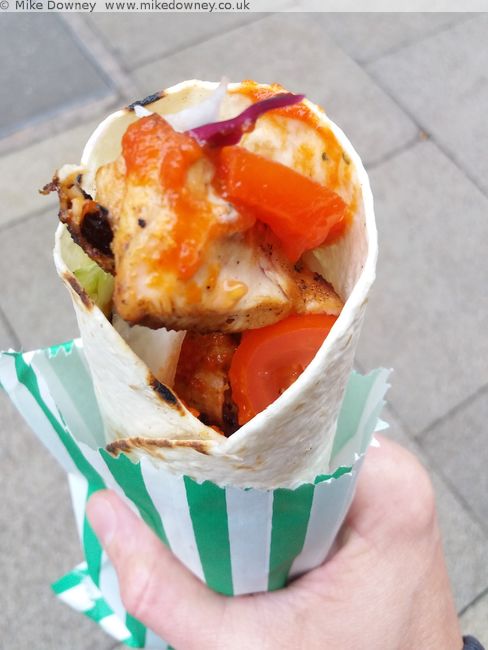 Birmingham is full of bears. I would often combine looking for bears with Lunchroulette. Most of the time I ended up near somewhere selling baguettes and I didn't bother taking photos of those. My lunchroulette photos are up to date but I realised that I hadn't uploaded any of the bear photos yet.


A few weeks ago I went to the food market in Victoria Square and randomly chose which stall to get my lunch from. I ended up at the vegan burger one. I thought I'd try the pulled-pork style Jackfruit Burger. The 'cheese' was a bit strange but the burger itself was ok. 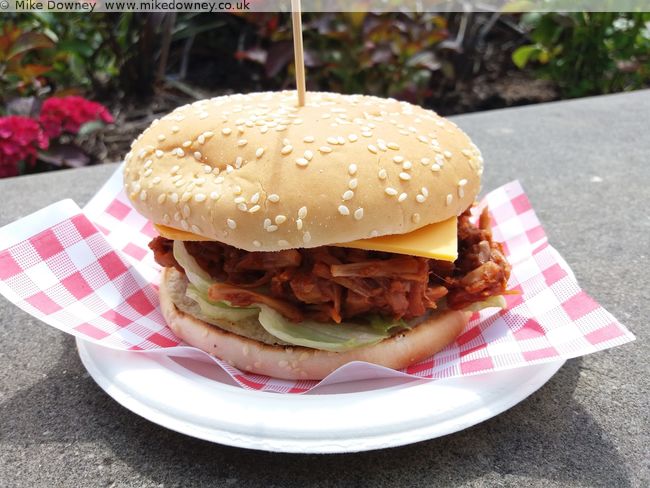 I did the same thing today but the first roll of the virtual dice selected the coffee van so I tried again and ended up with a tray of filled dumplings. They were nice but the best part of the meal was the crunchy chilli sauce which had crushed nuts in it. 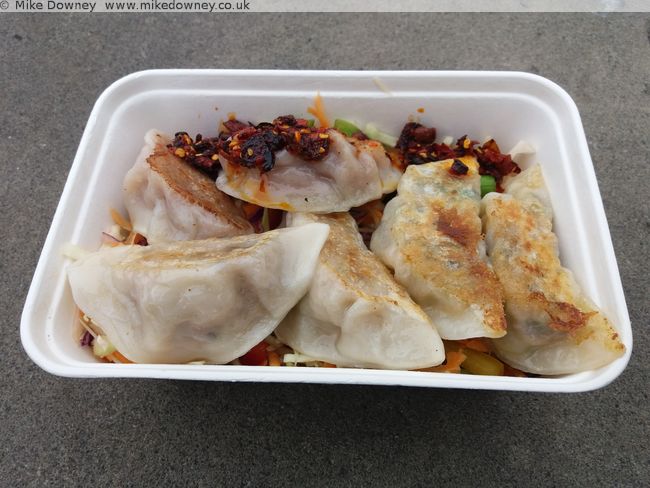 I have done a few more Lunchroulette dinners this year which I didn't blog about at the time. In approximately chronological order, they are:

The randomly chosen meal type was Burger and I rolled a 10 on the computer generated dice. I picked a route at random and walked towards the city centre, counting the burger places along the way. I ended up at Love Chicken on the High Street. I chose a chicken fillet sandwich meal (I can't remember the exact name for it but it was slightly spicy chicken fillets in a bun). 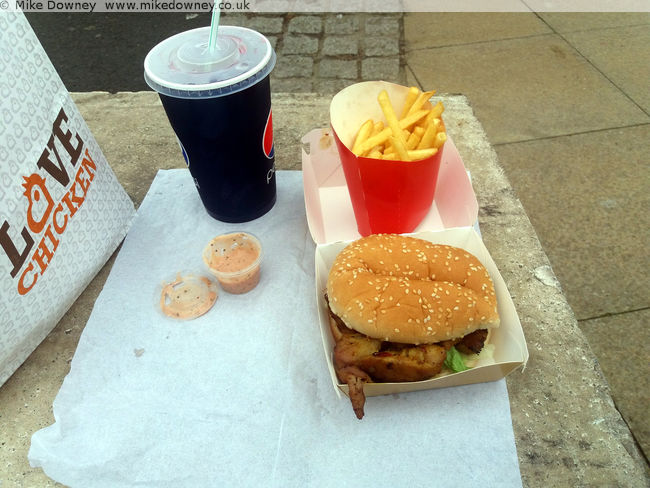 This was a pub lunch with some collegues from work. I used the random number generator to pick a panel from the menu then an item from the panel. I ended up with the full rack of ribs. Good but huge. 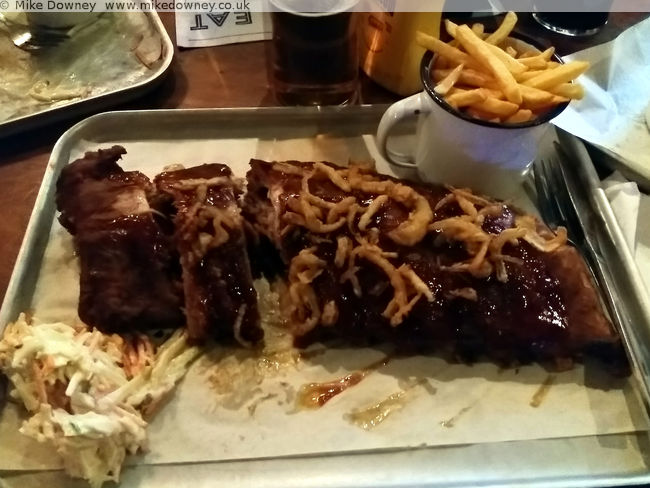 I regularly walk past Big John's take-away but this was the first time I had gone inside. It was nice to get proper chippy style chips instead of the thin french fries which most take-aways do. Two pieces of chicken and a box of chips turned out to be a lot more food than I expected. 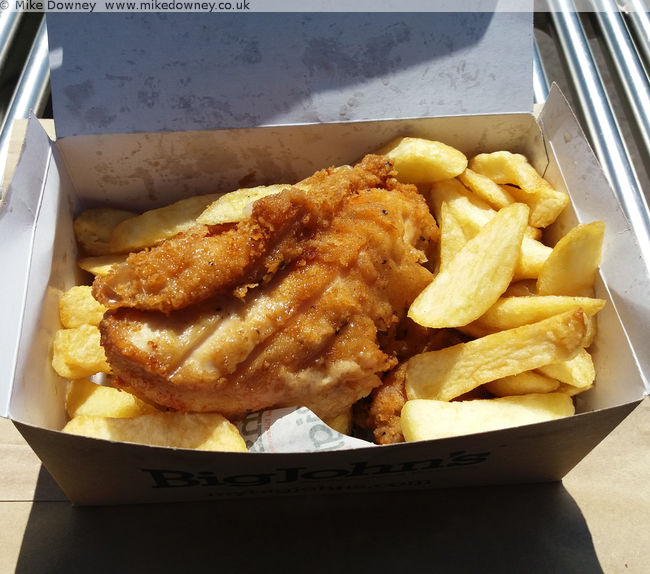 I went back to the German Market again and picked a random stall to buy my lunch. This time it was one of the Pretzel stalls. The salami pretzel sounded good so I bought one of those. 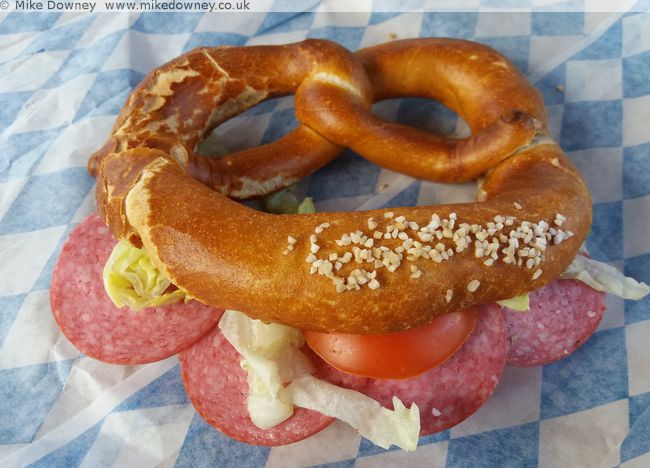 The pretzel was pretty much what you expect: soft, chewy and very salty on top. I had change left so I thought I would try a dessert next. The choice of desserts was reasonably wide and included pancakes, sweets, cakes, marshmallows or chocolate coated fruit kebabs. The dice took me to a marshmallow stand. 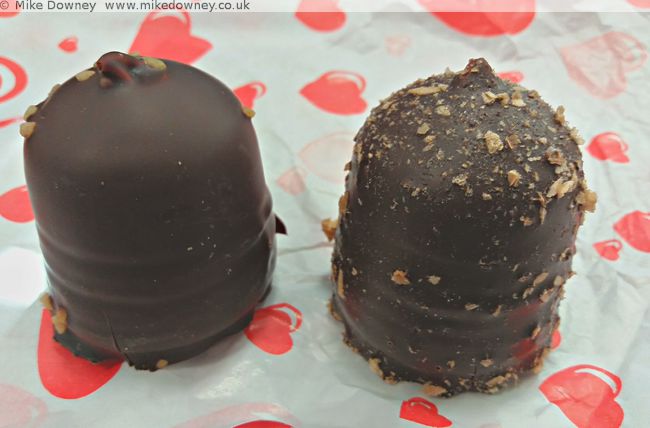 I chose an orange and a gingerbread one. The marshmallow is softer and stickier than the sort you get in bags, and sits on a small waffle or wafer-like disc.


The German Market is in full swing in Birmingham and I am still using the random number app to choose my lunch.

The dice took me to a schnitzel stand which offered a choice of different meats. I let the dice decide and came away with a chicken schnitzel. I also got some chips to go with it. 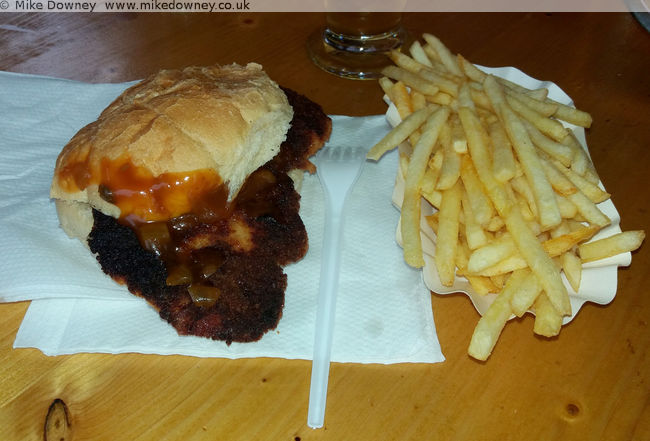 I had asked for the mushroom sauce and I think they gave me the curry sauce but it was still good, and went well with the schnitzel.

The choice was a bit easier this time. The dice chose the half-metre bratwurst stand so I didn't have any extra choices to make. I didn't let the dice choose my condiments, I added half ketchup and half mustard. 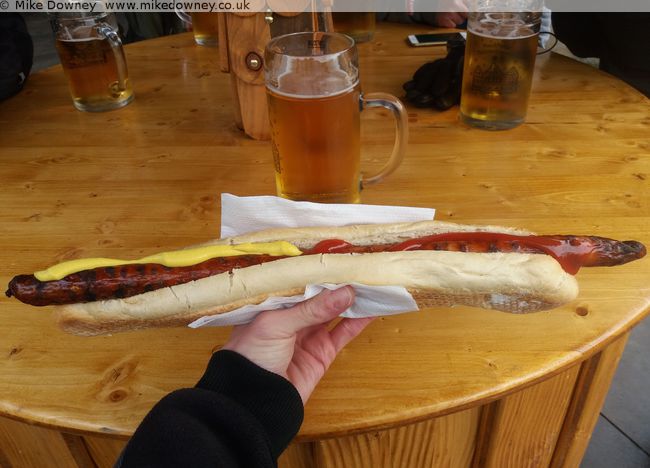 The sausage was fine but the bread was a bit chewy. Although it looks a lot of food, I still felt hungry afterwards.


The German Christmas Market returned to Birmingham last week. We popped out for an inaugural pint or two when it opened but this week I decided to get some food. Instead of using the Wheeldecide website, I used a random number generator app on my phone to choose which of the many food outlets to choose.

I found myself in front of a chalet-style take-away which had a range of different menu items all based around burgers, potatoes and mushrooms. Instead of letting the dice choose how much I ate, I went for the full menu since I didn't want to end up hungry. 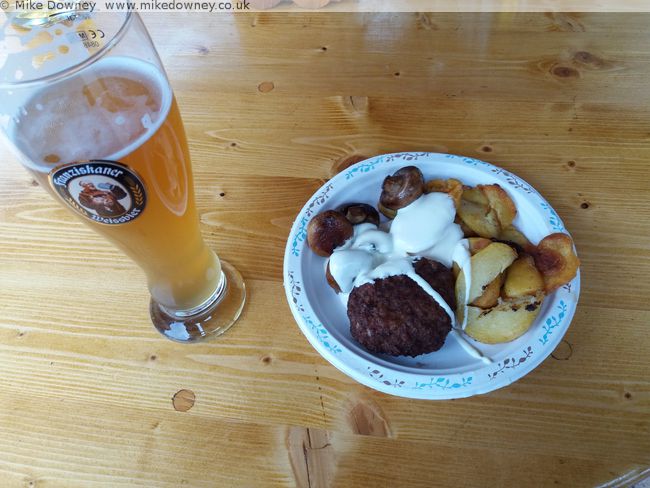 The garlic sauce was a bit too strong but the meal itself was good, as was the wheat beer.


A few weeks ago I decided to try somewhere different for lunch. I found a website called wheeldecide.com which can randomly choose from nearby restaurants or take-aways. I decided to use it to choose where to go for lunch.

This place was a bit of a walk. I didn't know where 'New Town Row' was and had to look it up on a map. When I got there it was almost empty but while I was paying for my sandwich it started to fill up. I chose their 'sandwich of the day' which was pork and stuffing. It came with a very thick gravy and a few pieces of crackling.

I walk past this place, in the Minories, fairly regularly. It does sandwiches and hot food. I decided to try the all day breakfast for £5 which had bacon, egg, sausage, black pudding, beans, toast, hash brown and tomatoes. It also came with a cup of tea. It was good value and very filling.

I needed to walk to the shops to pick up something I had ordered from PC World so I put the postcode for the High Street into Wheeldecide. It kept coming up with places in the Palisades, which is closed for refurbishment, so I decided to go to Wasabi, in New Street Station, instead.

I had been wanting to go there since it opened. I chose one of their salmon sushi boxes, which came with a couple of spicy chicken skewers. 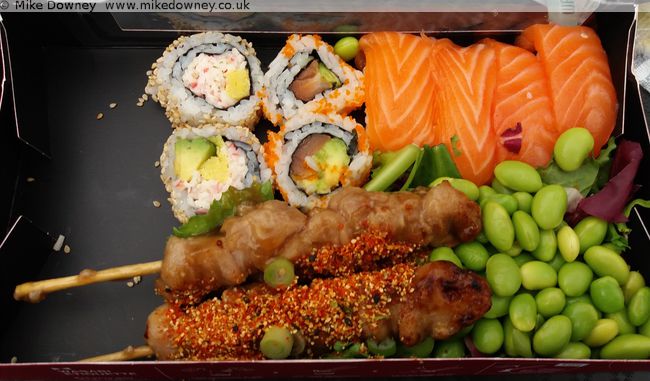 They have a wide range of sushi and bento boxes, with rice and noodles. I'll have to revisit to try something else.


The barley bread was one of the recipes I wanted to try during the main run of the A-Z of baking but I had difficulty tracking down the barley flour. I eventually managed to find some in a vegan/health food shop in Digbeth in Birmingham but by then I had already made the Nottingham Apple Pudding.

The only versions of this recipe on-line seem to be more like a savoury scone than a bread, made with buttermilk and baking powder. I thought I would try to make a more traditional bread, using yeast. Since baking powder was only invented in the mid 19th century, if the barley is a genuine traditional food, then early versions would have used yeast. 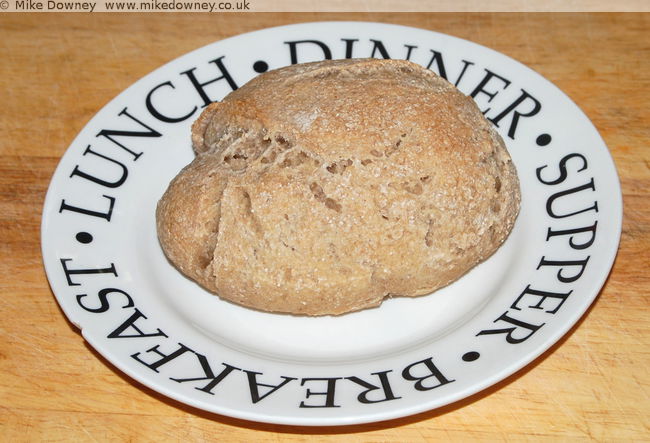 I used a mixture of barley flour and bread flour, added yeast and salt and then enough milk to make a soft dough. It rose quite slowly so I left it overnight. I only made a bread roll sized loaf as an experiment but it came out ok. I will have another go sometime in the future and try a few other variations on the recipe.


I've been hearing a lot about the Starbucks Pumpkin Spice Latte recently. It's been hard to walk down the street without seeing a poster or advertising board announcing their availability. I thought I should try one to find out what all the fuss was about.

I popped into a Starbucks on the way to work and ordered a 'tall' one, using their hilarious nomenclature of calling the smallest size tall. First impressions were promising. There was a very pleasant cinnamon aroma coming up from the cup.

Then I tasted it.

First impressions can be very deceptive.

I couldn't finish it and half of it got poured down a grid.


A few months ago, a load of decorated owls popped up in and around Birmingham. I managed to find and photograph a few of them on my way to work and during my lunch break.


It's been a while since I've written about eating out so I thought I'd mention a few places I've been to in Birmingham recently. The first one is Aunt Sally's Caribbean restaurant. I've been there a couple of times at lunchtime. The first time I had the jerk chicken (as you do). The second I tried the mutton curry. On both occasions I chose the larger size but I really struggled to finish the mutton. The prices may have gone up a bit recently but the food is good and the serving sizes are generous. 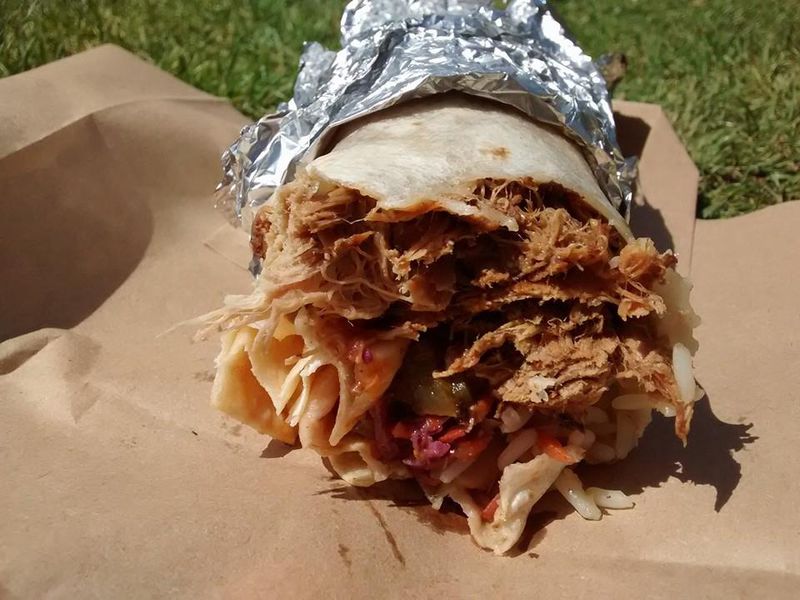 The second place worthy of a mention is Habaneros, the burrito van near the Cathedral. I decided to try the pulled pork burrito with all the trimmings (apart from guacamole since I'm not a big fan of avocado, but I might try that next time). They cram a lot of food inside a 12 inch burrito and it's another lunchtime venue worth visiting.


It's been quite a long time since I posted any non-food photos (back in September when I dabbled with some HDR images), and I haven't done any pinhole photography since 2008.

Yesterday was Worldwide Pinhole Photography Day so I decided to have another go, this time in colour and digital (most of my previous pinhole work was medium format on black and white film). I made a pinhole 'lens' by drilling a hole in a body cap and taping some foil over the hole. I made a hole in the foil using the thinnest needle I could find.

I did a few test photos indoors before going out for a walk along the canal. Since I didn't take my tripod with me, I set the camera to maximum sensitivity to keep the exposures short. Most of the outdoors shots were between 0.5-2s so I still had to brace the camera against something solid but they came out ok.


We were back in Birmingham today so we paid a visit to Woktastic, which we go to occasionally when we're in the city centre. We always have the all you can eat sushi and every now and then they introduce different types of sushi. 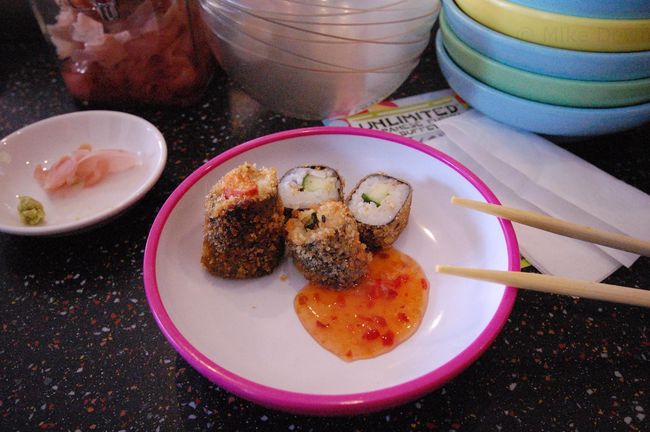